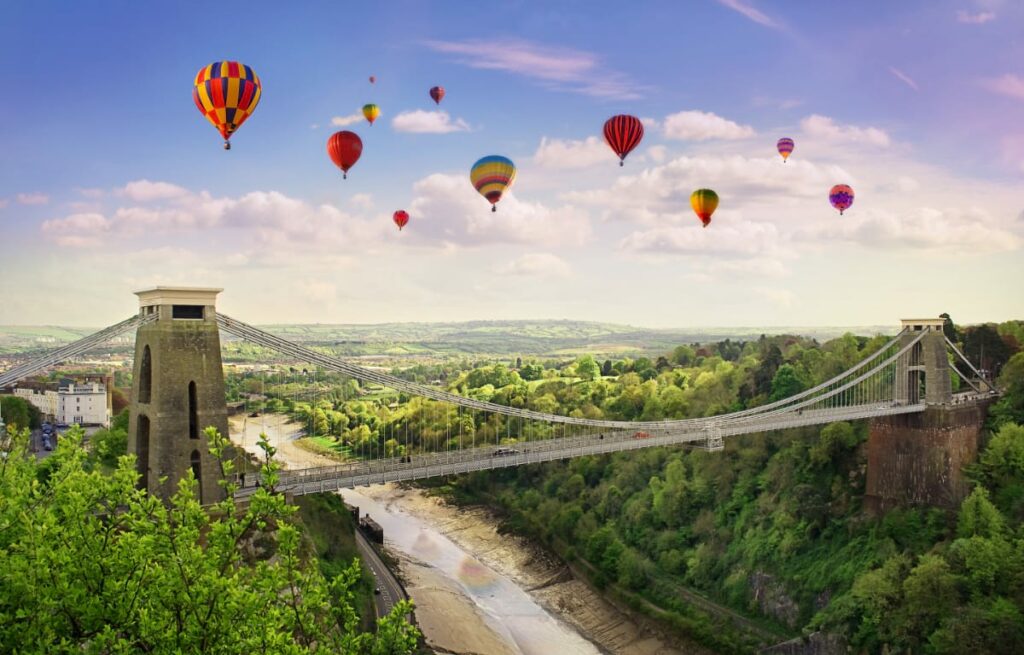 5 Best Places in the World for Hot Air Balloon Rides

Come and discover the thrill of a Hot Air Balloon ride! If you are looking for an adventure and a unique experience, hot air balloon rides are an absolute must-do activity during your holidays. A hot air balloon flight is the perfect way to witness the different attractions, landmarks, and sceneries of some of the most beautiful locations in the world with an added twist. Taking flight over your favorite dream destinations, these rides promise a new perspective while offering all the best of every view.

The mythical Serengeti awaits. At the top of our list, the Serengeti is the crown jewel of all African safaris. Home to the magnificent Big 5, namely, the rhino, buffalo, lion, elephant, and leopard, this stretch of land covering over 14,700 km² is bursting with life and adventures waiting to unfold. Depending on the season and the area, this unique place showcases a multitude of exciting flora and fauna sightings.

Among the most famous national parks in the world, the Serengeti has no equal as it hosts the most incredible synchronized movement of mammals ever recorded. The Great Wildebeest Migration is one of the key attractions in the Serengeti. Each year, millions of wildebeests, zebras, and other mammals undertake this perilous trip north to the greener grass of the Mara region. The herd will face multiple challenges along the way, such as attacks by cunning predators, a constant search for freshwater, and the river crossing, among others.

Early in the year, around January, the wildebeests can easily be spotted in the South West of the park for the calving season. Hundreds to millions of wildebeest will give birth in the tall green grass where food and water are abundant. They will remain in this area until March before moving up towards the Grumeti River. June to July is usually the best time to visit the Serengeti as you can easily witness the huge hoard galloping in the plains to the North West. You may also spot the Mara River crossing, one of the most exciting parts of the migration as the animals face the deadly current of the river and its even deadlier Nile crocodiles to reach the green pastures of the Masai Mara National Reserve.

While this spectacle is impressive from any game drive, the view from a hot air balloon is an experience you will never forget. Taking a bird's eye perspective of this thrilling and mythical migration and its surrounding wildlife is a truly humbling experience. A hot air balloon safari over the Serengeti is a real game changer.

The ancient city of Bagan, previously known as the capital of Myanmar during the 9th through 13th centuries, is one of the most visited areas in the country. Situated in the Mandalay region, Bagan is famous for its multiple historical monuments that are densely scattered over 30 square miles. Nestled on a bend of the Irrawaddy river in central Myanmar, Bagan is considered a sacred location with over 3000 Hindu and Buddhist temples and pagodas spread across the location. Despite its cultural significance, it was only on the 6th of July 2019 that this historical site officially became a UNESCO World Heritage Site.

Among some of the best ways to experience this mystical land of temples, a hot air balloon ride over this tropical area is the best travel option to get a bird's eye view of this sacred ground. Gently rising into the air with the morning sun, you will get the pleasure of discovering Bagan and its many monuments hidden in the jungle setting while the landscape is still bathed in a mystical mist. You will also get the chance to soar above the beautiful silver stream of the Irrawaddy river, and the multiple kinds of cotton and peanut farms found across the region. The Bagan skyline speckled with gold, earth-red bell-shaped towers, and gilded spires is one of the most beautiful views one can find in South-East Asia, and is one of the best places in the world for hot air balloon rides.

One fact worth remembering about Bagan, formerly known as Burma, is that most of the monuments, temples, and pagodas seen in the area were built by hand. Built between 1057 to 1287, most of these sacred structures were initiated by King Anawrahta at a time when modern construction machines and tools had yet to be invented. These 3000 monuments were thus raised by human hands alone.

Let's go back to Africa. Not your usual bush landscape, the Sossusvlei region offers a twist to your typical African safaris. Flying above the oldest desert in the world, this hot air balloon safari is a breathtaking way to experience Namibia. You will get the chance to sail over some of the largest red sand dunes known to man and watch the sunrise over the horizon.

Found to the southwest of Namibia and stretching over 32,000 km², this seemingly barren land offers a peaceful and relaxing trip over Sossusvlei's salt and clay pans. As part of the Namib-Naukluft National Park, the best period to visit this region is usually between May and September, as the temperatures are slightly lower.

As a mix of two languages, the Nama "sossus" meaning "dead-end" and the Afrikaans "Vlei" for "marsh", the Sossusvlei area received this name as dunes intercept and block the Tsauchab River, which seldom flows further than the pan. Hence the name Sossusvlei, the dead-end marsh. This region is usually arid and boosts a rare photogenic beauty. However, after a heavy rainy season in the Naukluft mountains, the pan can be filled with water and resembles a lake, attracting multiple visitors to see the desert waterhole.

On another note, Albuquerque has become a famous location for hot-air ballooning for different reasons. While our other selected destinations are renowned for their picturesque views, Albuquerque in New Mexico is a favorite tourist spot as it has hosted the Albuquerque International Balloon Fiesta since 1972. As the world's largest hot air balloon event, this festival drew in over 880,000 spectators and 672 hot air balloons in 2021. The numbers are expected to grow further this year as the festival celebrates its 50th anniversary.

From the 1st to the 9th of October 2022, the New Mexico skyline will be filled with hundreds of colorful balloons of all shapes and sizes. If you wish to fly during one of the world's largest celebrations of hot air balloons, you can easily book a ride during the event. While prices may increase during this period due to high demand, it is still a trip that will be worthwhile as you soar over the Rio Grande and partly desertic landscape of Albuquerque among hundreds of other beautiful hot air balloons.

Also known as the alpine capital for hot air balloon rides, Chateau d'Oex offers a different landscape than our avid flyers. Set in the picturesque Alps and Prealps in Switzerland, this ride allows you to witness the stillness and calmness of a region formed in snow. As this stunning landscape unfolds beneath your wicker basket, you will have the opportunity to drift with the wind across snow peaks, frozen lakes, silver sinuating rivers, and even castles, all set against a beautiful alpine backdrop.

As long as the weather permits, hot air balloons take off from Chateau d'oex all year round, flying over the majestic Prealps, Gruyere region, Rhone plains, or even further towards the Fribourg plateau from May to October. This tour offers a marvelous view over the Romont castle and the city of Fribourg.

As the Albuquerque of Europe, Chateau d'oex also has its own hot air balloon festival. Next scheduled from the 21st to 29th of January 2023, the 43rd Swiss Alps International Balloon Festival is not an event to be missed. Gathering hundreds of hot air balloons in the Alps, this festival is a celebration of colors and passion dotting the white canvas of the snow-covered mountains and offers a bucket-list-worthy event.

If you are ready to soar above one or all of these marvelous views, get in touch with a reputable operator who takes your well-being, safety, and enjoyment at heart. Some companies also offer special services such as food and beverages if you want to add a little extra to your trip.

At Miracle Experience, we pride ourselves on offering our clients one of the best experiences on the market. Combining thousands of hours of flight, our hot air balloon rides are a real treat allowing you to witness the wild at its best under the guiding hand of our expert pilots. If you ever decide to visit the Serengeti, we can assure you that this trip will be a memorable one, graciously closed by our famous 5-star breakfast in the bush.

The Wildlife of the Serengeti and its neighboring parks

Welcome to Tanzania! Among some of the densest and most diverse wildlife areas in the world, the Serengeti and its neighboring parks are a haven for all animals. While it cannot be guaranteed that you will be able to spot all these magnificent species on a safari, a hot air balloon ride is sure to […]

Rosa Parera: A Story of Breaking Barriers and Soaring High

Welcome to the Miracle Experience, where the skies are yours to explore and the impossible becomes possible. Today, we would like to introduce you to one of our pilots who has flown her way to the heights of success, becoming the first female pilot for hot air ballooning in Tanzania. Rosa Parera is not just […]

Enjoy an incredible balloon safari over the Serengeti & Tarangire National Parks. Embark yourself on an extraordinary adventure.
BOOK NOW